Before you continue reading, we want to let you know that the information in this blog post is extremely disturbing. However, at Wounded Paw Project, we believe it is important to bring awareness to this inhumane treatment of animals, and though it is hard to read it is extremely important that you do.

Dogfighting is a “sport” that has been around for centuries. It was traditionally seen as a test of dog breeding and the training skills of the owner, but dogfighting has no place in the world we live in today. In the past, dogfights were regulated by law enforcement and used to settle disputes between individuals or groups without resorting to violence. But today, dogfighting is illegal almost everywhere–whether you’re watching or participating–and it’s considered animal cruelty because of the suffering inflicted on both animals involved in these fights.

While it is illegal, organized dogfighting still takes place throughout the United States, and because it is carried out underground it is nearly impossible to determine just how many people are involved in dog fighting rings. Based on fight reports in these underground publications and the number of dogs that enter shelters with injuries that align with fighting, the number of people involved in dogfighting in the United States alone is in the tens of thousands.

Why People Get Involved in Dogfighting

There are quite a few reasons why people get involved in dogfighting, and the most common reason is greed. It is not unusual for $30,000 to be exchanged in a single fight, and the sale of dogs from promising bloodlines can also bring in thousands of dollars. For other people, the attraction to dogfighting lays in using the animals as a way to fight their own battles and demonstrate their strength and prowess. If this is the reason why an owner became involved in the fighting and the dog loses it can not only result in a loss of money but also a loss in status leading them to take brutal and terrible action against the dog. And sadly for others, the appeal comes from just purely enjoying a brutal spectacle. 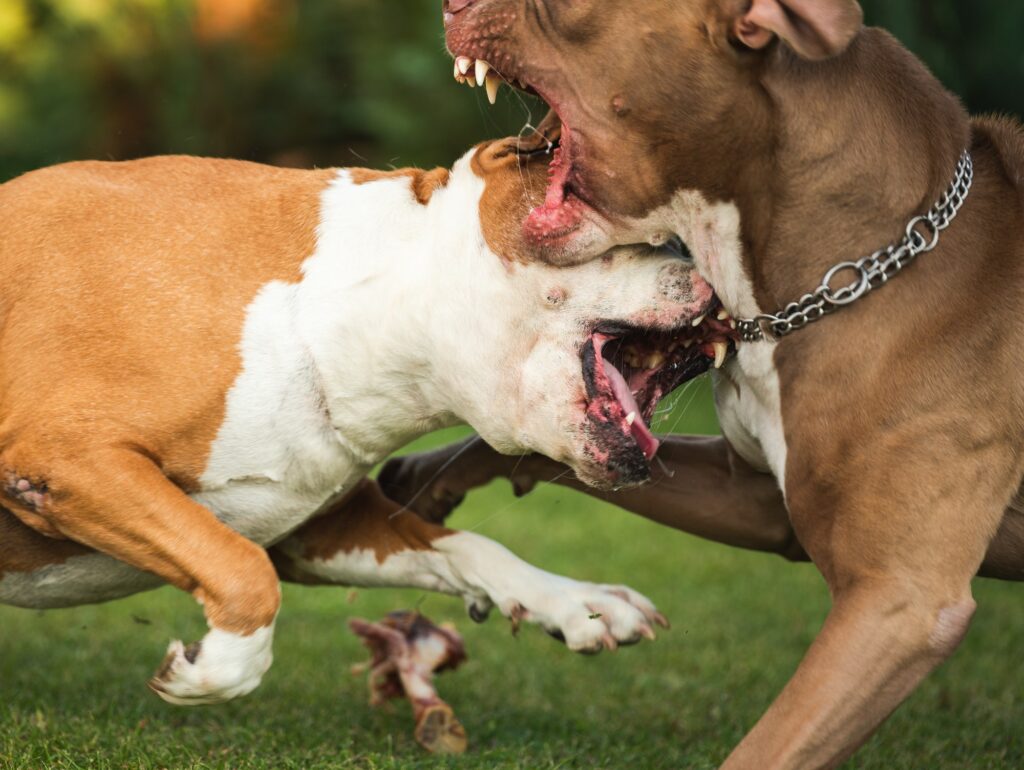 How Dogs are Trained for Dogfighting

There are a few different ways that dogfighters train their dogs and the dog’s environment plays a huge role in how they’re trained. In many cases, dogfighters will use “rolls” to prepare their dogs for fighting. A roll is when two untrained or inexperienced dogs fight each other–essentially practice fights–and one of the dogs is replaced with a trained dog after the first one loses. This way, dogs can be exposed to different fighting styles and learn how to deal with an opponent of varying size, strength, and experience.

But, any dog with size and muscle can be a successful fighting dog. When people breed dogs for fighting, some puppies will not have as strong of a fighting instinct and these dogs are used as bait dogs to help train the fighters.

Bait dogs are found in many ways and aren’t just the runts of the litter. Many dogs and puppies that are given away for free also end up as bait dogs. People who train fighting dogs and arrange these illegal fights will oftentimes put up ads looking to adopt dogs or they will seek out other pet owners who don’t want to bring their dogs to shelters and want to give them away fast. Bait dogs are also oftentimes stolen and the life of a bait dog is an incredibly cruel and sad one.

Bait dogs are used repeatedly over and over again to train the dogs that fight in competition with the commands and training they need for the main fight. This continues until the bait dog is killed or has sustained injuries that make them unable to continue being used in training. These bait dogs are typically left alive for several training sessions but once they are deemed to be no longer useful they will be either be given to a fighting dog to be killed or will be killed by the owner.

These dogs will typically have their mouths taped shut or have a muzzle placed over their snout so they are unable to hurt the “more valuable” dog. These pups experience countless broken bones, severe lacerations, and many other injuries during their lifespan.

If you are a dog owner then you know that your pup isn’t typically aggressive unless provoked. Many dogs that are aggressive have been abused or have experienced neglect at the hands of their owners. Because of this, people who participate in dogfighting use various techniques in order to increase dog aggression. 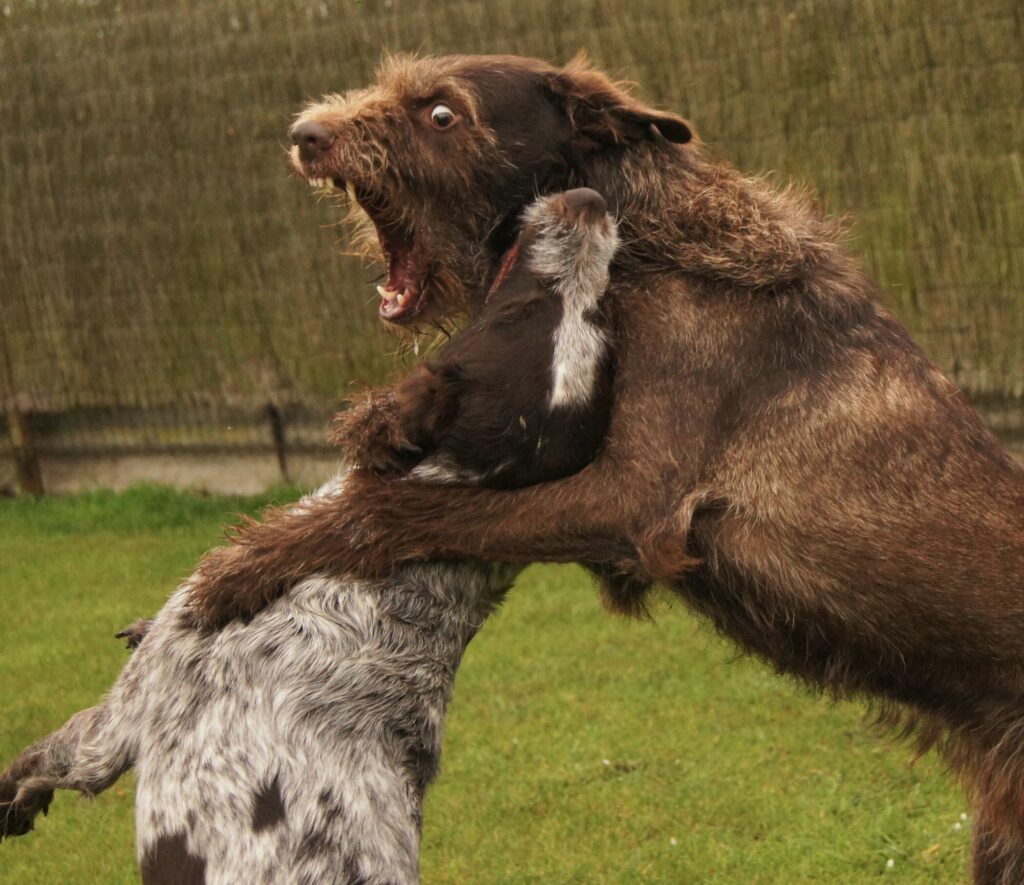 Fighting dogs are usually kept on heavy chains to help build their upper body strength. They are kept in close quarters on chains that are short enough that they are unable to reach one another, but close enough that they can antagonize the dogs around them. They will also use canine treadmills or other similar machines to walk the dogs in order to build their cardiovascular health. Another way that they build cardiovascular health is by using cats, rabbits, or bait dogs to lure the dogs around a running pen and after they have completed their exercise they will be given the animal to kill.

There are certain dogs that have been bred specifically for dogfighting however the owners will continue to build up their muscle, strength, and overall size with bulking diets and extreme exercise regiments. They are also given steroids and other supplements in order to speed up this bulking process and these steroids often times increase the dog’s aggression.

Fighting dogs are also injured very often so they are given antibiotics to help speed up the process. These dogs aren’t able to be taken to the vet to treat their injuries due to the illegal nature of dogfighting so their injures and wounds are often not taken care of properly.

People who are involved in dogfighting will not use positive reinforcement, instead, these dogs are abused when they do not do what is expected of them. This abuse sets up the trainer as the boss or alpha in the dog’s mind and will also make a dog more angry and vicious. Because fighting dogs are never shown love in affection, they always view their trainer as this alpha instead of a friend or companion. And any sign of meekness or kindness is viewed as a negative trait in a fighting dog. A dog that is too friendly or nice will end up being used as a bait dog or killed.

Another way that aggression is trained in these dogs is through starvation because a hungry dog is oftentimes a desperate dog. When a dog is desperate it has the capability to be angrier and while food has to be given to keep the dog alive, it is given in small amounts and measured carefully to ensure that they are never fully satisfied. When a dog is full it is content, and when it is content then it will be docile. These dogs will oftentimes be well fed to help build muscle but then starved in the days leading up the fight in order to foster their aggression.

Dog fighters take the time to choose the breed of dog carefully and will often go after dog breeds that are banned or have breed-specific legislation in place against them. Fight dogs will typically be involved in at least two test fights before they reach the age of two, and the dogs that underperform are then used as bait dogs. These fights also typically last until death with the winning dogs even succumbing to injuries sustained sometimes. In many cases when a fighting dog has become useless the owners will kill the dogs by drowning, electrocution, beating, or euthanasia.

We Need Your Help to Stop the Cruelty of Dogfighting

Dogfighting is illegal in all 50 states, but it is still happening. It is a highly secretive enterprise that is extremely difficult for law enforcement and other investigative professionals to infiltrate. However, just because it is difficult doesn’t mean it shouldn’t be done. At Wounded Paw Project, we are working to put an end to the inhumane practice of dogfighting. We are working with law enforcement, dog trainers, and other experts in the field to help raise awareness and start initiatives to keep these animals safe and we need your help to continue this work. Contact our team today to learn more about how you can get involved in your local area and help us stop dogfighting once and for all.